With the rapid growth of blockchains, there is a corresponding growth in cross-chain technology as developers find ways for different chains to communicate.

Instead of each blockchain living in an isolated "tower" (or ecosystem), cross-chain technology enables different types of blockchains to become a community. There are many different kinds of blockchains for different purposes, from public to private to consortium groups. Each one functions under its own unique smart contract, and developers have scrambled to keep up with ways for them to communicate with each other, hence the rapid growth in cross-chain technology.

With Dexfolio, cross-chain tracking in the defi space just got a whole lot easier thanks to its user-focused app.

A Big Problem for Blockchain Technology

Connection Between Blockchains a Must

But with the explosive growth of blockchain technology, managing portfolios on the different blockchain networks became complex and difficult. Ground-breaking applications designed for one blockchain became outdated or inadequate. Developers knew they had to create solutions that would work to connect multiple blockchains and as a result, there has been rapid growth in cross-chain technology.

A Tale of Two Currencies

One way to explain this disconnection is to think of the fiat currencies that each country uses as legal tender. It isn't easy to transfer one currency to another because each one has its own independent money and system. USD can't be used outside the US, and the process of turning it into another currency can be slow and difficult even with the sophisticated exchanges and mechanisms set up for this purpose.

Cryptocurrency is in the same situation. It's not possible to easily convert Bitcoin to Ether, for example. But with cross-chain technology, it's becoming simpler and cheaper as developers bring out various solutions to the problems currently faced by the industry.

What is Cross-Chain Technology?

This helps to solve the problem of poor or non-existent information interaction and the value transfer problems between the different blockchains.

How does a Cross-Chain Work?

Among the crucial pieces of infrastructure that make cross-chain connection possible are relay chains (sometimes known as sidechains) such as the Polkadot Relay Chain. Let's dive deeper into this example.

What is the Polkadot Relay Chain?

This relay chain has experienced outstanding growth since its launch in 2020. Along with other relay chains, its purpose is to build bridges between various defi ecosystems and facilitate blockchain building. It plays a key role in the connection of chains and the communication between them.

Its token, DOT, has been listed by CoinGecko as one of the top crytocurrencies by market cap, evidence of its meteoric rise since its launch. This makes it one of the most successful blockchain projects of the past twelve months, but it isn't just a pretty face; its value comes from its usefulness.

To explain further, Polkadot is defined as a scalable heterogeneous multi-chain technology. Although a mouthful to say, it means Polkadot is flexible because it is built without assumptions about the structure or nature of chains in its network. Even data structures or systems outside of the blockchain network can become parachains once they fulfill the required criteria.

Another key feature is pooled security and trust-free interchain transactability. Simply put, this means that the Polkadot network uses no third parties and relies on the pooled resources of its users as security. This makes it one of the truly decentralized networks.

But Polkadot isn't the only example of cross-chain technology. There are many different applications and many projects underway that can or will enhance the usability of blockchain ecosystems. One that has risen to prominence in recent times is the Stellar Blockchain, a protocol intended for the world of finance.

What is the Stellar Blockchain?

This system is an open-source, decentralized payment protocol. It facilitates fast payments and transactions between any pair of currencies, with the ability to bridge easily and cheaply between entities holding cryptocurrency. It also makes transactions involving fiat currency fast and easy.

Stellar's native currency, XLM, powers the stellar network and all of its functions. It is similar to the Ethereum network in the way it operates.

What Makes the Stellar Network so Powerful?

Different blockchains use different smart contracts, which in the past has made cross-chain transactions difficult. Blockchain applications could only access certain smart contracts with which they agreed, and other blockchains were not accessible. While this is still true to a degree as technology catches up, Stellar gets around this problem by using its unique consensus mechanism, which allows everyone on the network to reach agreement about transaction validity quickly.

The Power of Consensus

This consensus mechanism leverages the power of mini-networks so that each time a node adds a Stellar transaction to the global ledger, it reaches out to its own mini network of other trusted nodes that agree. These mini networks are known as quorum slices, and as long as their smart contracts agree on which transactions are valid, the transaction can be processed cheaply and efficiently.

While Stellar and Polkadot are good examples of blockchain projects that have shaped the crypto world to this point, they are by no means the only ones. So many projects are underway to connect blockchain technology to the real world that it's impossible to keep abreast of them all.

Examples Already in Use

Some of these projects include supply chain management, a digital vehicle identity scheme implemented by BMW, a digital urban land registry project being rolled out in Africa, various healthcare applications, and so much more.

What is the Internet of Things?

The Internet of Things refers to objects with internet connectivity such as vehicles, personal devices, appliances, industrial machinery and more. More specifically, it refers to objects with the ability to gather data through sensors, software, and any other technology that enables them to send and receive data. An example would be a device receiving an automatic update when certain criteria are met.

How does Cross-Chain Technology relate to the Internet of Things?

Blockchain networks can facilitate the operation of the Internet of Things by providing the smart contracts needed to fulfill the conditions of each action in the real world.

An example of this is the supply chain system in which devices track and authenticate shipments and products using various technologies that include GPS. These devices can be used to monitor each step of a product's journey from raw materials to production, storage and distribution.

Will Dexfolio Track Other Digital Assets?

Although Dexfolio is more concerned with decentralized finance at present, long-term plans may mean expansion to include tracking for other digital assets as the industry grows. This will depend on the direction taken by the community and will be driven by user needs.

As the example of Stellar showed, decentralized finance platforms and applications are growing rapidly across the various blockchains, with the infrastructure required for their connection enabling a large number of real-world services to come on board as well as helping to create greater access between blockchains in the defi space.

One of these decentralized finance entities making waves is Hyperledger Fabric.

What is Hyperledger in Blockchain?

Launched by the Linux Foundation in 2015, the purpose of Hyperledger Fabric was to provide a customizable framework for distributed ledger applications. In other words, it is a database shared among members of a decentralized network and subject to the rules of its smart contract. In keeping with the principles of its founders, it aims to provide high levels of scalability, privacy, robustness, and the ability to customize.

The platform is built to accommodate customizable elements that enable users to navigate the decentralized finance ecosystem. Many applications based on this platform are currently in progress that will enable many different operations in the defi world.

Hyperledger has No Coin

Hyperledger does not have its own coin and never will; it exists as an open-source blockchain project created for better management of cross-chain systems. Its purpose is to develop robust, decentralized industrial applications using blockchain technology. It will continue to remain separate from the creation of digital currency.

The defi world is relieved that solutions are starting to come forward to solve the problem of the blockchains each being a separate ecosystem with no ability to communicate or exchange value.

To date, solutions have been awkward at best, with centralized blockchain technology the best option. There is still no perfect solution, but as the defi space grows, so does the technology that enables blockchains to work together.

What does this mean for Dexfolio users?

Through integrations and partnerships with other entities as well as the capability of the Dexfolio app, Dexfolio users will be able to track their portfolios across different blockchains, with access to the Ethereum chain and the Binance Smart Chain already built into the app. Different blockchains will be added in the future, with easy onboarding for multiple exchanges.

What does this mean for Dexfolio users?

Development in the future will continue to be community driven to keep up with market trends and represent industry needs, and users will continue to have governance opportunities through the DEXF token. Implementation of the roadmap for Dexfolio includes integrating community participation in the app's ongoing development. 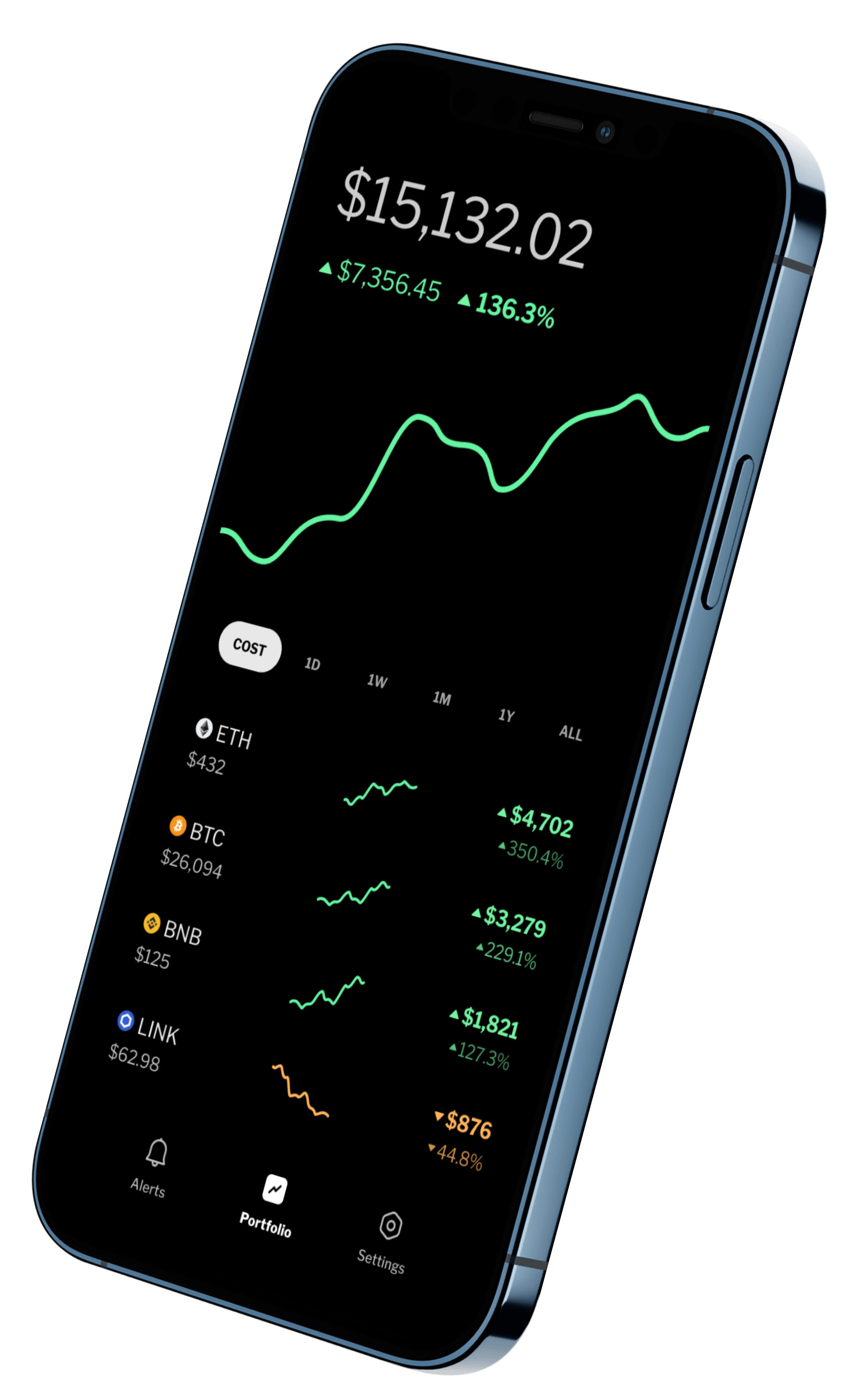 Ben Sash is the founder and CEO of Dexfolio, the company behind the industry-leading cryptocurrency tracking app.

Ben has led the development and design of digital products for over six years in his various roles with prominent e-commerce brands.

With his experience in leadership, product design, and agile development, Ben has built an unstoppable team and compiled the vision for Dexfolio to shape the industry and become a leader in its sector.

Back to All Articles